Ellen Cornett Wows Us with Animal and Fairy Tale Art

Like much of Ellen’s oeuvre, I think this first work of art is whimsical, complex, and full of Ellen’s wry humor. First we have the pun of the rabbit ears on top of the 1950s-era TV. Then we have a kind of art-within-art device: Disney’s Cinderella playing on the TV. Ellen has portrayed her favorite scene from Cinderella—the one where the the mice and birds create a lovely ball gown for Cinderella. That’s my favorite, too. The mice on the floor are just part of life meets art, I guess.

Ellen often researches the background on mainstream fairytales and childhood myths and songs, and that’s how she came up with the next work of art. It started when she couldn’t get the “Pop Goes the Weasel” song out of her head (I didn’t ask how that happened), including these lyrics (if you click on them you can listen to the song on YouTube—this is a full-service blog):

All around the mulberry bush,
The monkey chased the weasel

So she looked into those lyrics and came on an early-20th-century version featuring a possum chasing the weasel around a chicken coop. In her warped rendering, she put both the possum and the weasel in wheeled vehicles being pulled by other poor little animals. Like I said, her art is complex. Here you go:

The work below is titled “The Fourth Pig,” inspired by short story with that title, which is  also the title of the big the story is in—a 1936 collection of fractured fairy tales by Naomi Mitchison. So, you be the judge: Is the fourth pig that Ellen inserted a wild boar? I haven’t read that story, but it’s gotta be. But look at his sweet face! Aww. 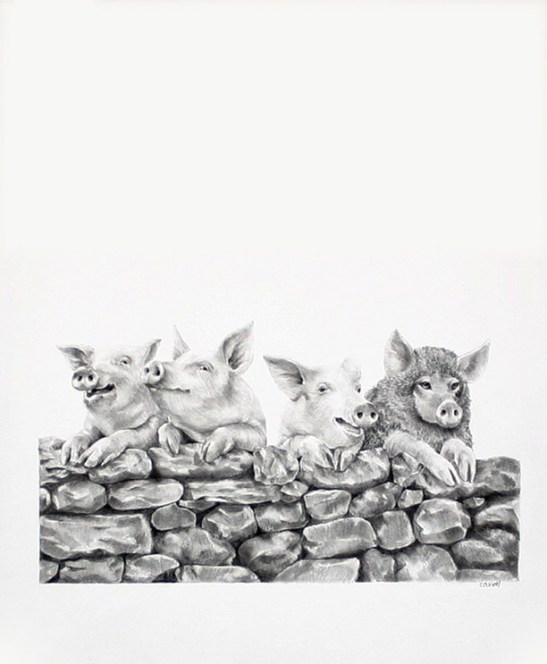 This next one is just so whimsical and cute and sweet—we have a frog on a swing scaffold, appliquéing spots on a giraffe. 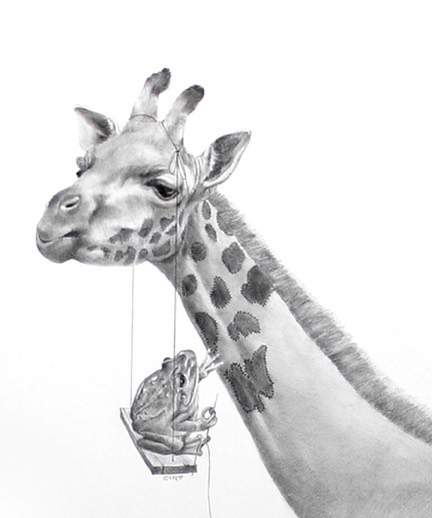 Ellen created a series portraying three blind mice, and I have to say I find these just creepy. Or maybe gruesome is the word. I know the song clearly states that the farmer’s wife cut off their tails with a carving knife, but I never really had that image in my head before. And then, the first cut-off tail is repaired with a safety pin? Second one welded on by a mouse-welder? Thanks, Ellen. The third mouse is having his tail sewn on, not quite as barbaric. Ellen has given it the subtitle “Another sewing project.” 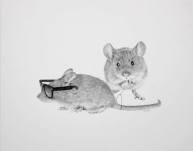 Next we have the cutest little raccoon I’ve ever seen. He’s at a birthday party, and the frog balloon has gotten loose and is floating away. It takes a certain kind of a mind to think of these things.

Finally, in a metaphor made literal, an unlikely trio of animals are chatting in the foreground, trying to ignore the elephant in the room. 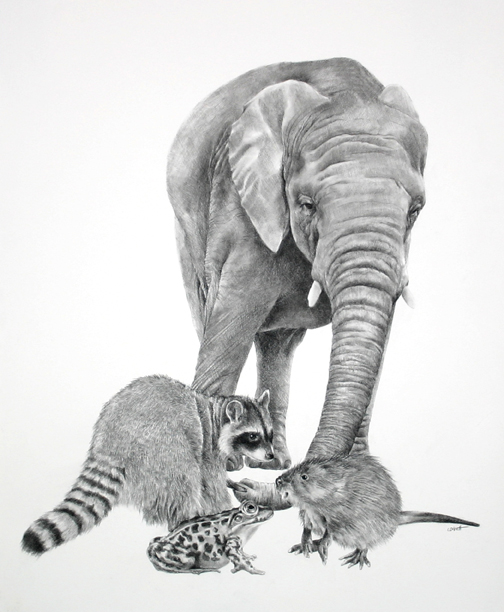 So, there you have a compilation of what our Ellen has been up to this summer.

We’re all eager to get back together in the studio on Wednesdays.

This entry was posted on August 20, 2016 by wisemarian in Carbon pencil and tagged Ellen Cornett.