In the Wednesday Studio we all have enjoyed seeing how Linda Andreatta and Vince Iannacchione have created quite different versions of the same scene.

It started with this photo, taken by Linda in Death Valley:

Linda Andreatta’s comment: Zabrieski Point is an other-worldly introduction to the amazing Death Valley. I’ve been to Death Valley twice, and I still find the landscape fascinating. So different from the East Coast. Maybe I’m attracted to the land because you can see how water sculpted the land, but now it’s one of the driest, hottest places on earth. The organic shapes of the hills drew me in . . . .

Back in the studio, Linda used her photo to create this pastel work:

It goes without saying (but I’ll say it anyway), we were all blown away by Linda’s work.

Then, a year or so later, we noticed Vince working on something new. “Whatcha doing, Vince?” I asked. He said he was struck by the abstract perspective of Linda’s rendition of Death Valley, and her work inspired him to try and depict an other-worldly landscape in watercolor.

So, both of them thought of the scene as “other-worldly.”

Vince used only Linda’s pastel work as his source to create his own version—he never even saw the photo. He chose watercolor for his rendition of Zabrieski Point in Death Valley: 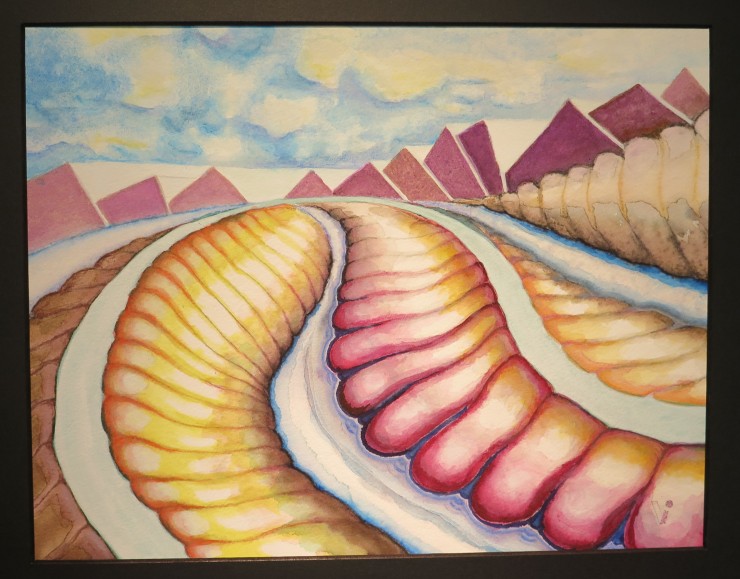 I really love both of their works. But what I love even more is thinking about how two artists approach a subject so differently.

This entry was posted on March 6, 2018 by wisemarian in Pastel, Watercolor and tagged Linda Andreatta, Vince Iannacchione.