It took two visits, but during our stays in Boston at Thanksgiving and Christmas I finally succeeded in taking in the whole of the Class Distinctions exhibit of 17th-century Dutch art at Boston’s Museum of Fine Arts.

Vermeer and Rembrandt, whose art is highlighted in the exhibit, are indeed the stars of the show. The two Vermeers, The Lady Writing a Letter (from DC’s National Gallery) and The Astronomer (rescued after WWII by the Monuments Men, now in the Rijksmuseum, Amsterdam), are captivating and could easily absorb one’s attention for an entire visit.

Rembrandt: The Shipbuilder and His Wife

My favorite of the several Rembrandts was The Shipbuilder and His Wife, for its energy and the sense that it was capturing a spontaneous moment in the everyday life of this couple, and also for the recognition it gives to the role of the wife in the business dealings of her shipbuilder husband.

Another Rembrandt, a life-size portrait of a wealthy gentleman dressed in his finest, has an interesting back story: The subject objected to the pose and refused to pay, resulting in Rembrandt’s losing any further portrait commissions.

In Frans Hals’s Portrait of Isaak Abrahamsz. Massa, I thought the expressiveness with which he painted the face and relaxed pose of his friend Izaac Massa set it apart from many of the other portraits of the wealthy merchant class and the aristocracy.

Laborers and the poor shown realistically

The works portraying people wealthy enough to commission a portrait were less illuminating about the realities of life in 17th-century Holland than the paintings depicting the laboring classes and the poor. The artists made no attempt to gloss over or romanticize the conditions in which these people worked, and the predominant tone was earthy and dark. 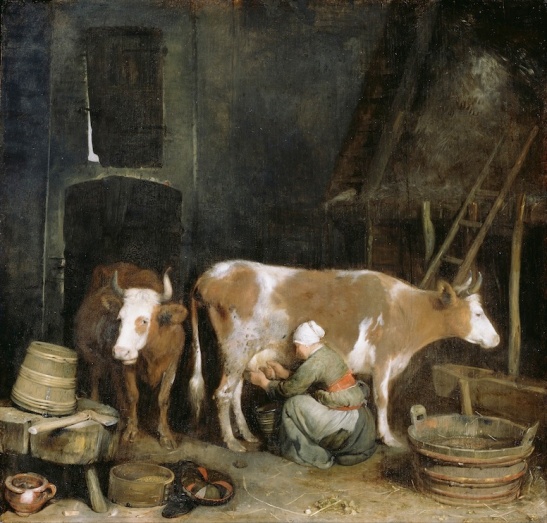 Ter Borch: Maid Milking her Cow in a Barn

The paintings were generally smaller, and the figures were secondary to their settings, which contained remarkable detail in the furnishings, equipment and surroundings of people engaged in all manner of occupations. The barber-surgeons, milkmaids, fishmongers, farriers, butchers, notaries, linen “grassers,” soldiers, prostitutes, and others were the people whose labor supported the lifestyle of the wealthy individuals portrayed in the earlier part of the exhibit.

In reflecting on these paintings I wonder what made such down-to-earth subjects quite acceptable, even appealing, to the 17th-century Dutch, while such art was considered revolutionary two centuries later when the French Impressionists and New York’s Ashcan School artists also chose subjects from everyday life. Why did Dutch art evolve differently than did that in France? With these questions—and sublime images of the Vermeers, Rembrandts and Hals—running through my mind, the cold drizzle and prospect of a long journey home melted into the background.

This entry was posted on January 13, 2016 by wisemarian in Exhibitions, Portraiture and tagged Boston Museum of Fine Arts, Eileen Leahy.