Follow Fran, step by step, in creating an amazing portrait

Fran creates a grid to use in changing the dimensions of the reference photo to her pastel paper.

Fran Tomlinson recently finished a pastel portrait of her spouse, Joy, seated at the Knabe baby grand in their home. Joy is an accomplished pianist and loves that baby grand.

Once Fran  got the idea of doing a “double portrait” that included both Joy and the piano, she spent a lot of time deciding on the composition—with or without metronome? with or without music on the stand? piano open or closed?

Fran reports that ultimately she was “intrigued by the idea of using the piano lid to frame Joy and showing the beautiful innards of the instrument.”

Here are some photos of the work as it progressed. Fran worked on it about 3 or 4 hours a day, 4 or 5 days a week, from the end of January until early May when they were preparing to leave for a vacation in Norway. She put the finishing touches on it in August and brought it to our first class last week to show us. All we could say was “wow.”

Here’s the initial drawing, showing the grid that Fran created.

“Putting in the color, beginning at top left so my hand doesn’t smear the work.”

“Laying in some background.”

“Coloring in the ‘portrait’ part of the composition.” 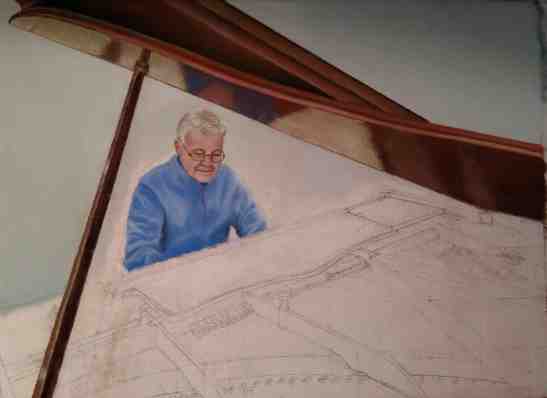 “Completing the fleece sweater. Joy actually wore a black sweater, which pretty much looked like a black blob, so I changed it to blue to add vibrancy and interest. Adding the folds and shadows was quite a challenge.”

“Starting on the brass hardware. Again, working left to right to avoid smearing.”

“I overlaid bright yellow with light olive green to achieve the brass color.” 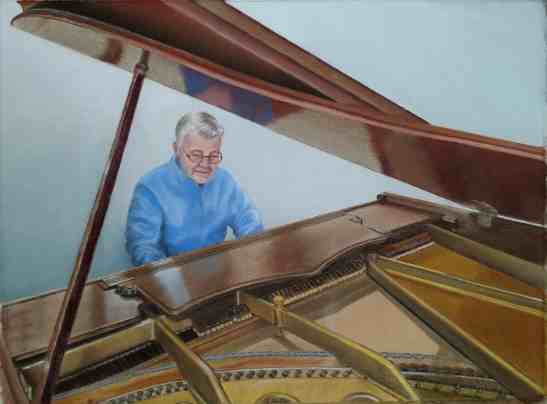 “All but the strings.”

“Adding the strings was quite a challenge. I used finely sharpened pastel pencils. There are about 230 total strings: three strings for each hammer in the treble; two strings per hammer in the midrange; and one string per hammer in the bass. The lower-pitch strings are much thicker than the higher ones. Rather than try to draw each and every string, I tried to put in just enough detail to make it appear that all were there.”

Voila. Anything besides “wow,” already noted, is just redundant.

Fran says that everyone in the Wednesday Studio provided encouragement. “Ellen got me unstuck more than once, suggested using a very sharp pastel pencil for the strings, and introduced me to carbon pencils, which I used to sharpen some of the details. Martha had some good suggestions regarding color, and Lynne caught me in a couple of perspective errors. Thank you, everyone.”

And thank you, Fran.

This entry was posted on September 20, 2016 by wisemarian in Pastel, Portraiture and tagged Fran Tomlinson, Pastels.